NOLA Motorsports Park has been in development for over two years, since first being announced in April of 2015. The track was announced the day after IndyCar hosted their first (and only) race at the circuit, but the track is also used for far more than that.

The main road course has five layouts, while the karting circuit has five more layouts. The Indy Layout is the highlight of the circuit, featuring 13 turns in 2.74 miles. While the course was unfortunately not used for any future IndyCar events, the facility is still used for many grass roots racing events, including SCCA races.

The track is now available on Steam, as a free add-on for rFactor 2. For more information, check out the information below.

We’re incredibly excited to release this next track – it’s the first to be released under the Studio 397 banner! NOLA Motorsports Park, an entirely scratch built track, who’s development was greatly enhanced by the very close participation of the track’s representatives, in particular Scott Touchton. This cooperation and open access to the track itself helped the ‘track team’ to create a highly accurate and realistic sim version of the real life track. As usual the ‘track team’ has gone to great lengths to bring NOLA to life in rFactor 2, and we think the results speak for themselves.

Getting to know NOLA Motorsports Park

Don’t let the laid back southern charm fool you, with its bucolic and peaceful surroundings, vast expanses of green grass, and lush trees that line the outer perimeter – NOLA hides intriguing surprises in its subtle cambers and gently flowing fast corners. Once you start to drive it, you’ll realize NOLA makes you work hard to knock off those elusive tenths and even hundredths of a second! The perpetual challenge to master the track and achieve a fast flow is addictive – which means the more you lay down laps, the more you want to keep driving. Taunting you in almost every turn, Nola’s smooth curbs can be your best friend or your worst enemy!

NOLA also comes with a sidekick, a Karting facility that offers the same level of excitement as the road courses in a smaller package. But again, don’t be fooled by its size – it’s a real ‘arms aching’ workout to conquer. Each of NOLA’s Karting layouts is a complex labyrinth of fast changing turns that rewards consistency, heavy trail braking, and precise and sometimes risky maneuvers. Mastering a section by turning in at just the right time and blasting through multiple turns on full throttle is exhilarating once you can flawlessly pull it off without landing on the grass.

NOLA Motorsports Park has five uniquely challenging road course layouts, each with it’s own particular twist and sometimes subtle, sometimes important differences. What all layouts do have in common are the last series of turns. In these last three turns you need to be extremely conscious of your brake and throttle inputs as you try and ease in. Self control on throttle and smooth light braking are key to finding an ideal entry line into the very crucial last turn. This last right hand turn, just before the main straight, requires repetition and patience to nail it – just when you think you can go full throttle, its deceptive camber changes on exit it will catch you off guard if you get overconfident too soon!

The Indy layout is NOLA’s highlight. Its super high speed chicane through turns 8 and 9 means your choice of entry is crucial to sustain full throttle and carry maximum speed all through the back straight. As with any track layout, it’s the sum of its parts that make up a fast lap. That’s especially true for Indy’s unforgiving temporary curbs in turn 1 and turn 6. They demand respect. Go in too deep on entry and catch a tire, best-case scenario you lose some precious tenths, worst-case you flip up on two wheels or lose control and smash into your opponent! On the surface, layout A looks similar to Indy, but there are some key differences. In layout A the high speed esses replace the back straight and require consistent slowing, throttle inputs and weight transfer to ease the car through. Layout A also does without the temporary curbs in turn 1 and turn 7, which means it’s a little less technical and more forgiving. 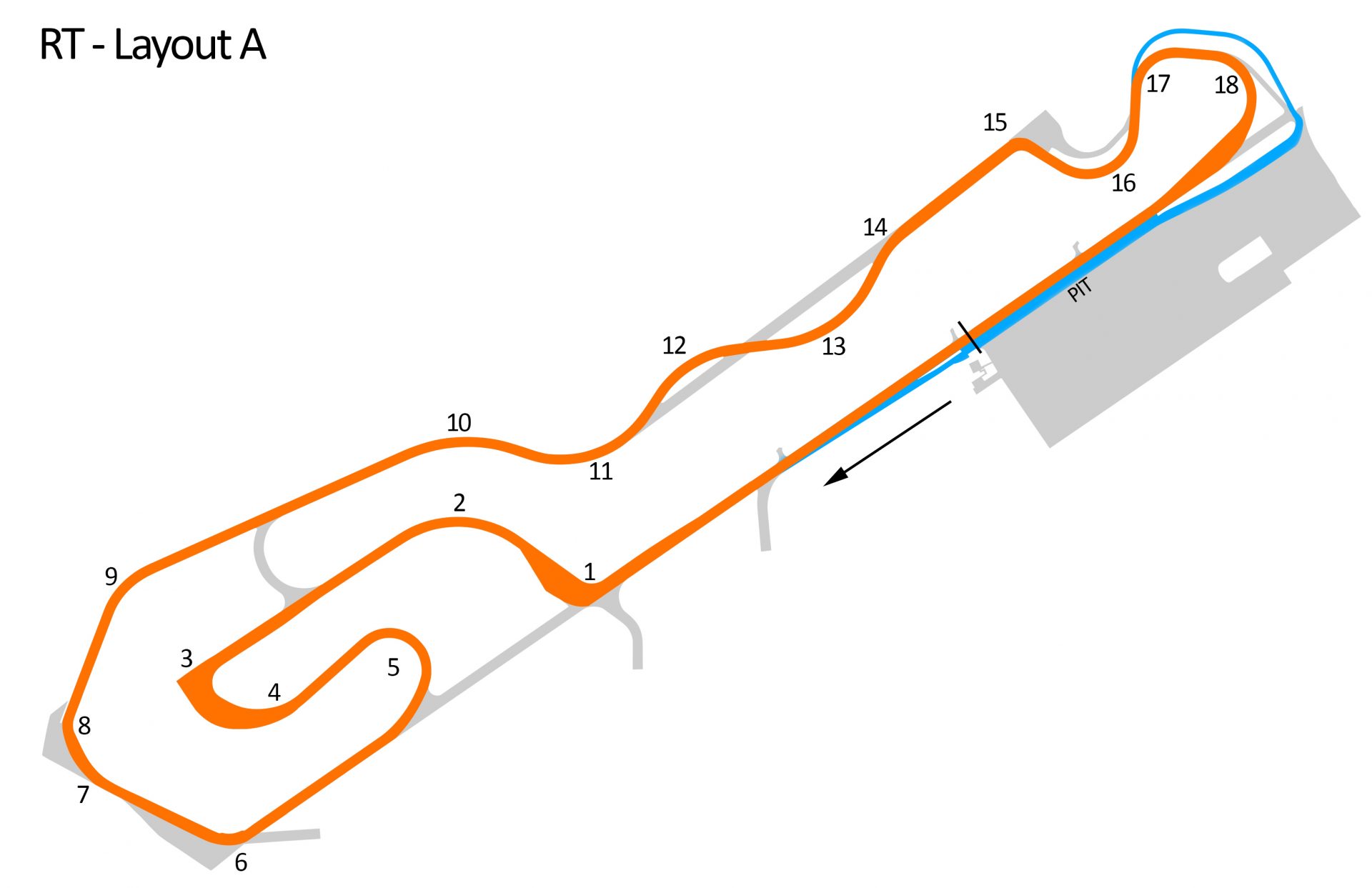 Layout B is the shortest layout, and it’s perfect for running slower cars with good traction, like the Skip Barber, Megane and Clio, and even the USF 2000. Turns 2, 3 and 4 make up a flowing mid speed section before going into the long esses. It’s a perfect place for daring outside overtaking! 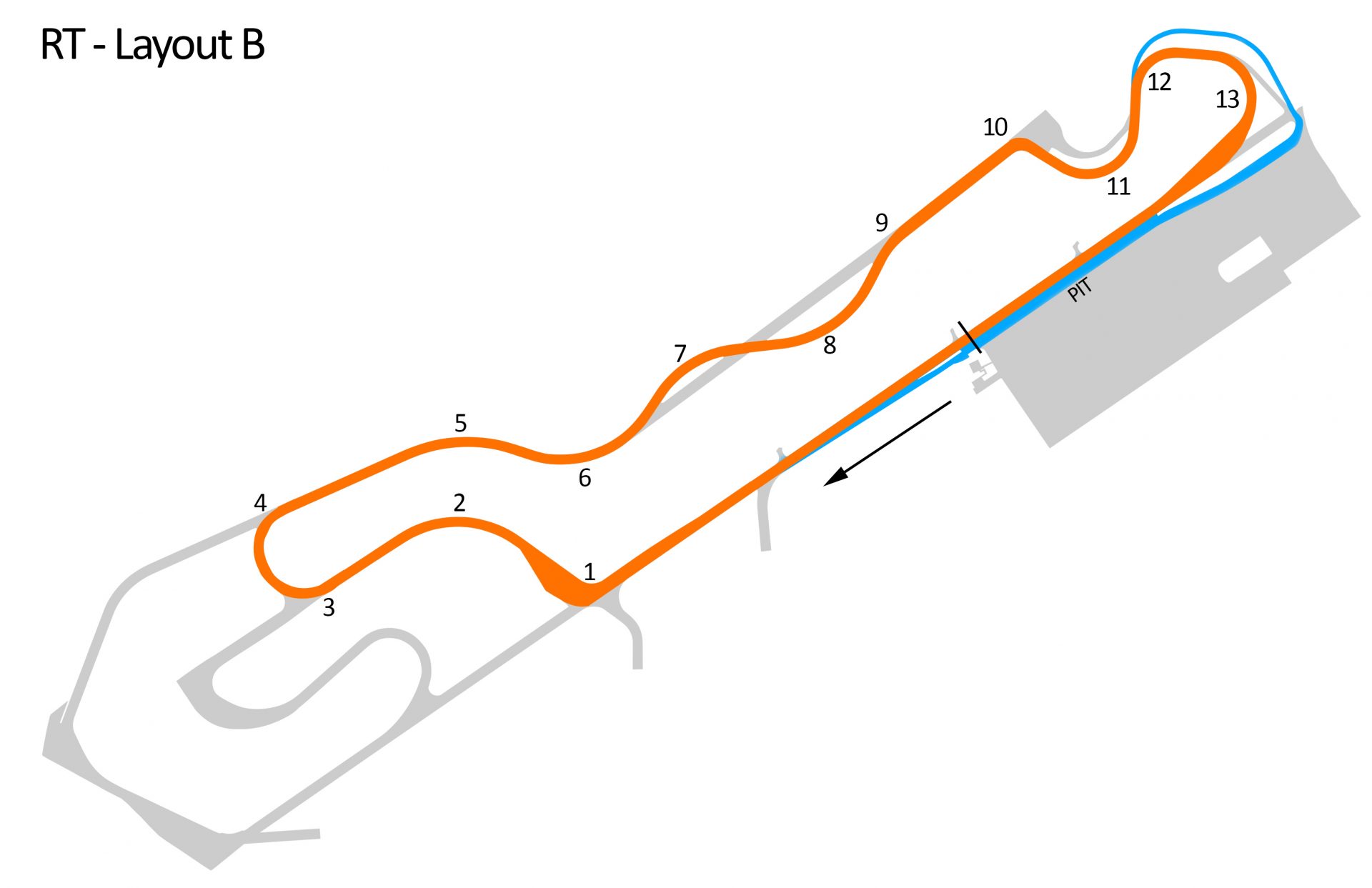 Layout C is fast! The combination of the longest front straight, and therefore highest top speed, with the generous width and run off in turn 1 makes for an exciting high speed overtaking opportunity. The combinations of straight line speeds and fast ‘almost’ full throttle esses are a great match for vintage open wheel and prototypes – but of course not limited to! 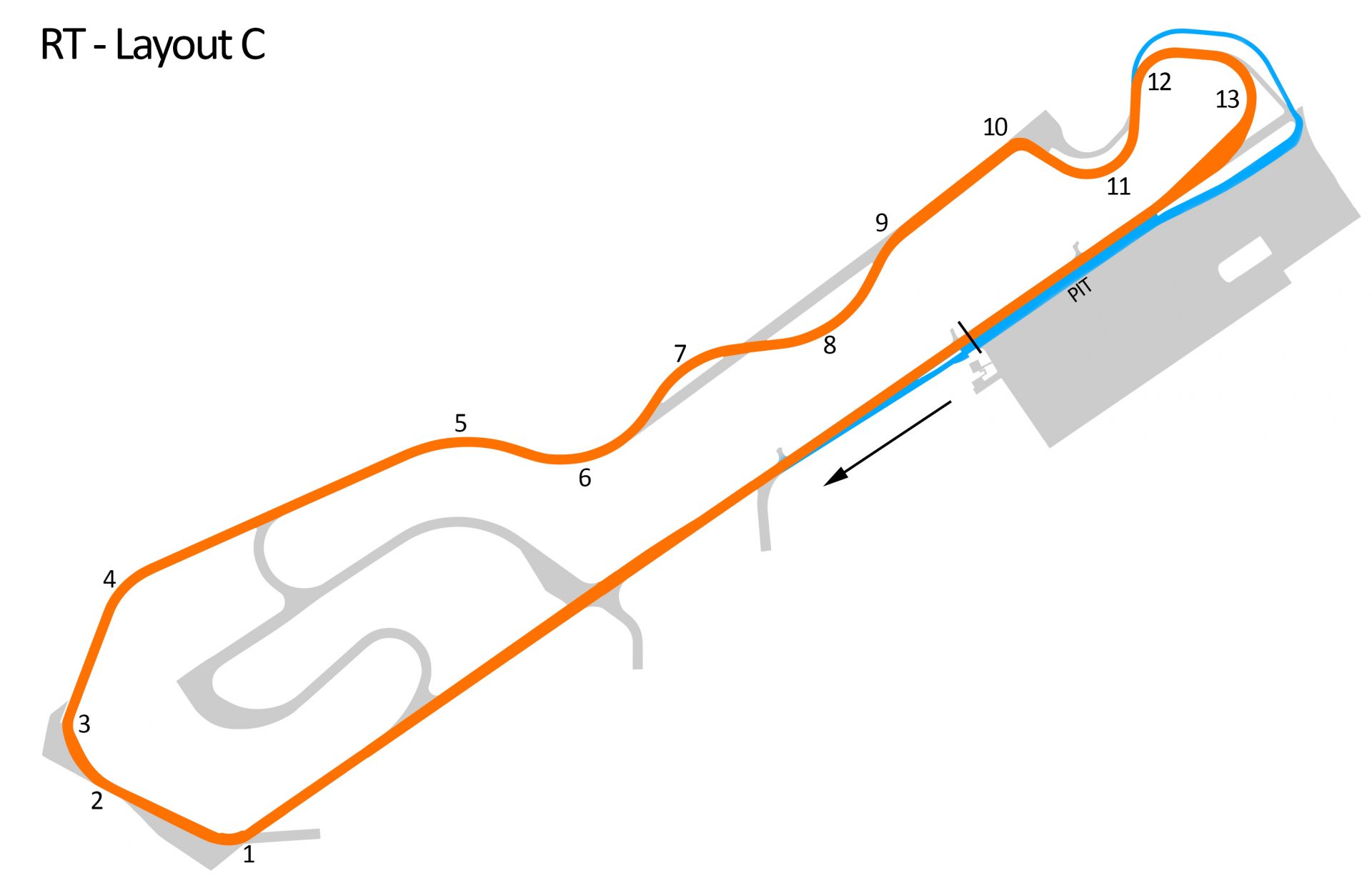 Layout D, after Layout C, has the second longest front straight, but unlike C, it’s followed by a very very sharp right hand cut back into turn 1. This requires precise braking and precisely judged entry speed! The mid sector of Layout D, following turn 1, is very technical – comprised of a series of deceptive turns that are extremely easy to misjudge and overcook. 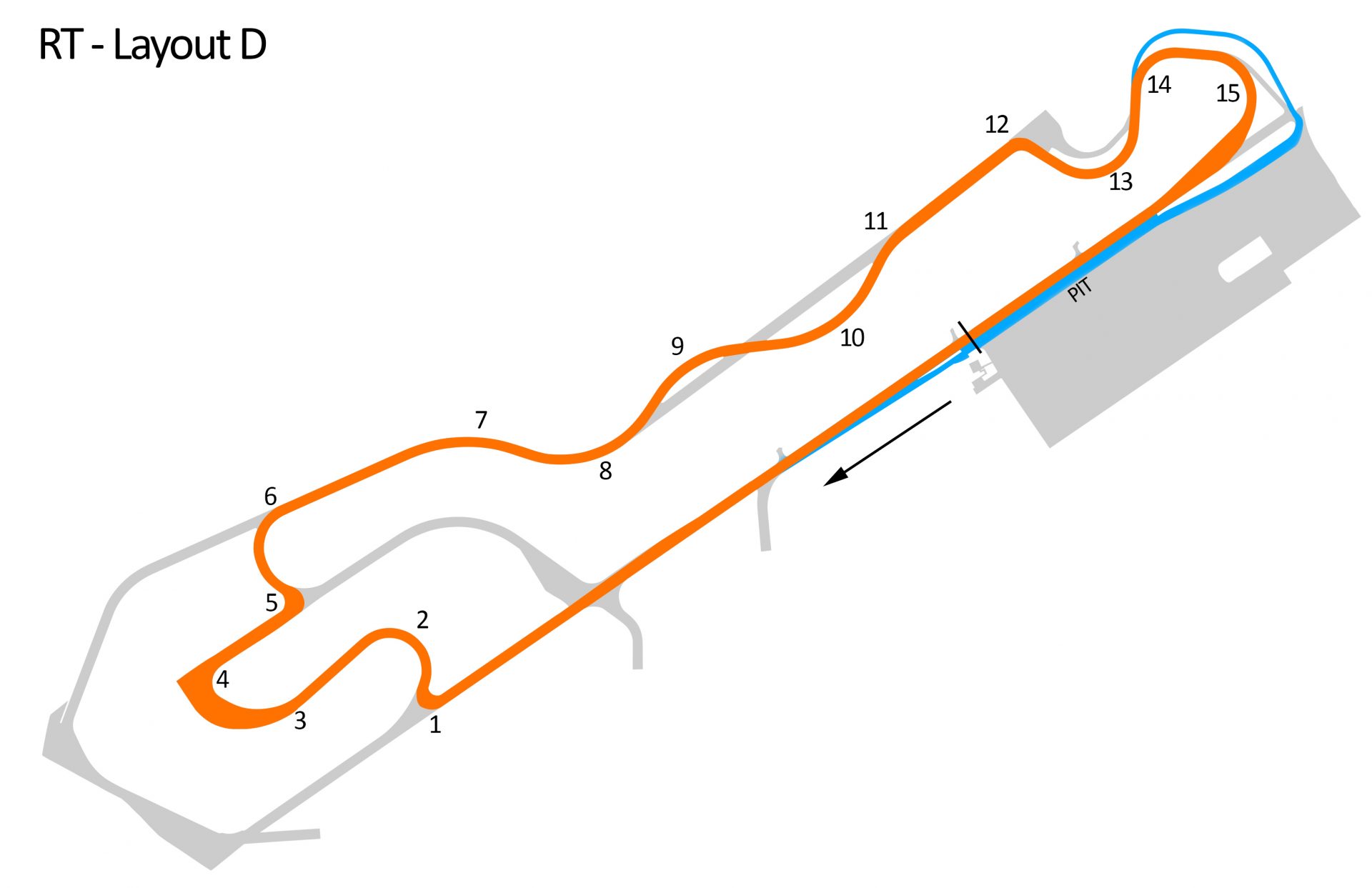 NOLA Motorsports Park also boasts five fun and exciting karting layouts! Each layout is a technical, fast paced track in it’s own right that demands patience and perseverance to master. Once you do find that groove, the satisfaction comes when you bounce off curbs just right to for turn in, control drifts through high speed sectors, and delicately balance weight transfers to keep up that momentum!

Karting A is a great blend of slow and fast turns. The rush of pushing harder and harder and eventually mashing full throttle through turns 4 to 7 and then slowing just as you roar into turn 8 is a thrill! 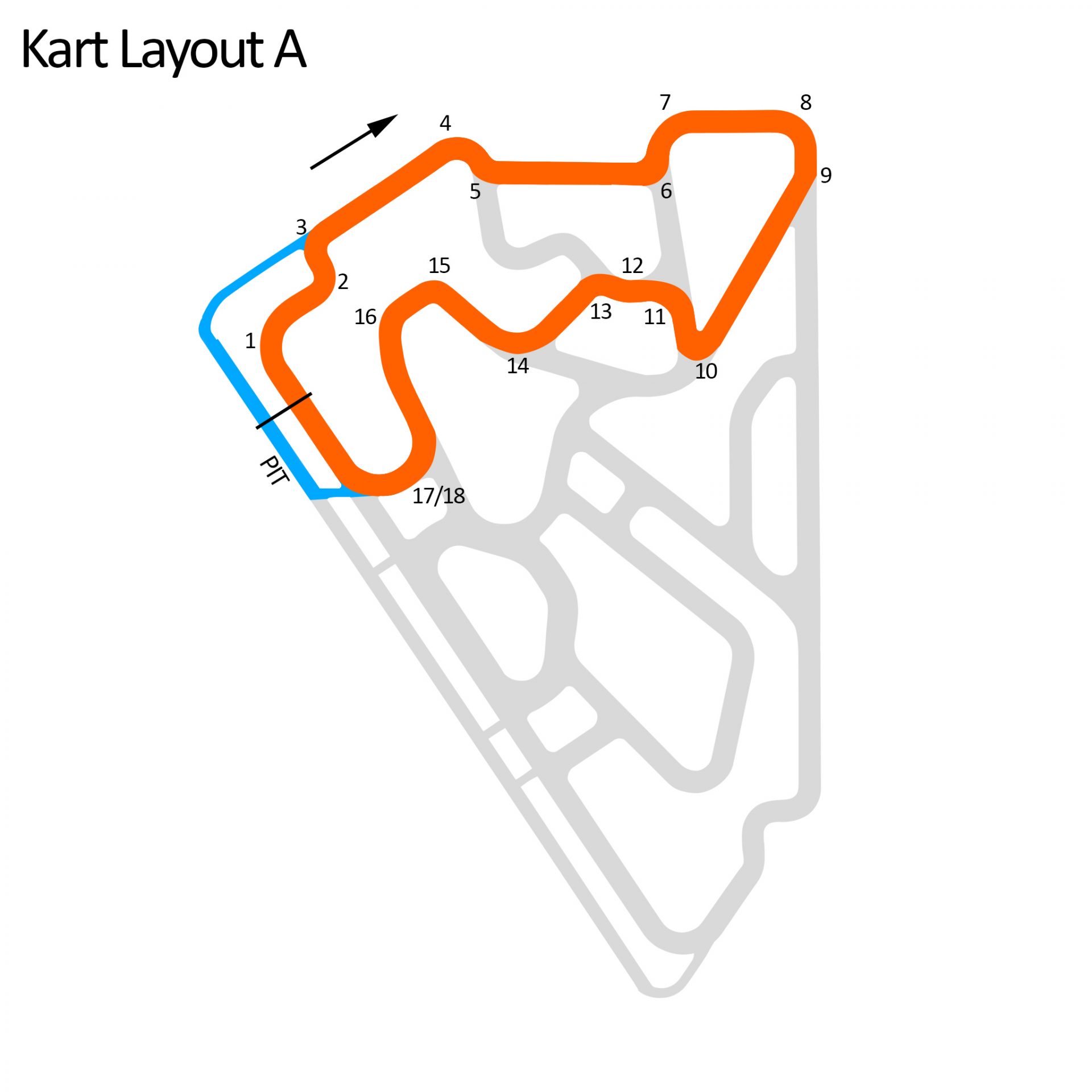 Karting B is the shortest layout, but it still requires feather touch maneuvering through the slow speed zig-zagging mid sector of turns 4 to 7. Here, finding a consistent rhythm using weight transfer is key. Get greedy, take too much of inside curbs, and you’re heading for a spin. Hit the curbs just right, and you’ll float through and keep momentum. 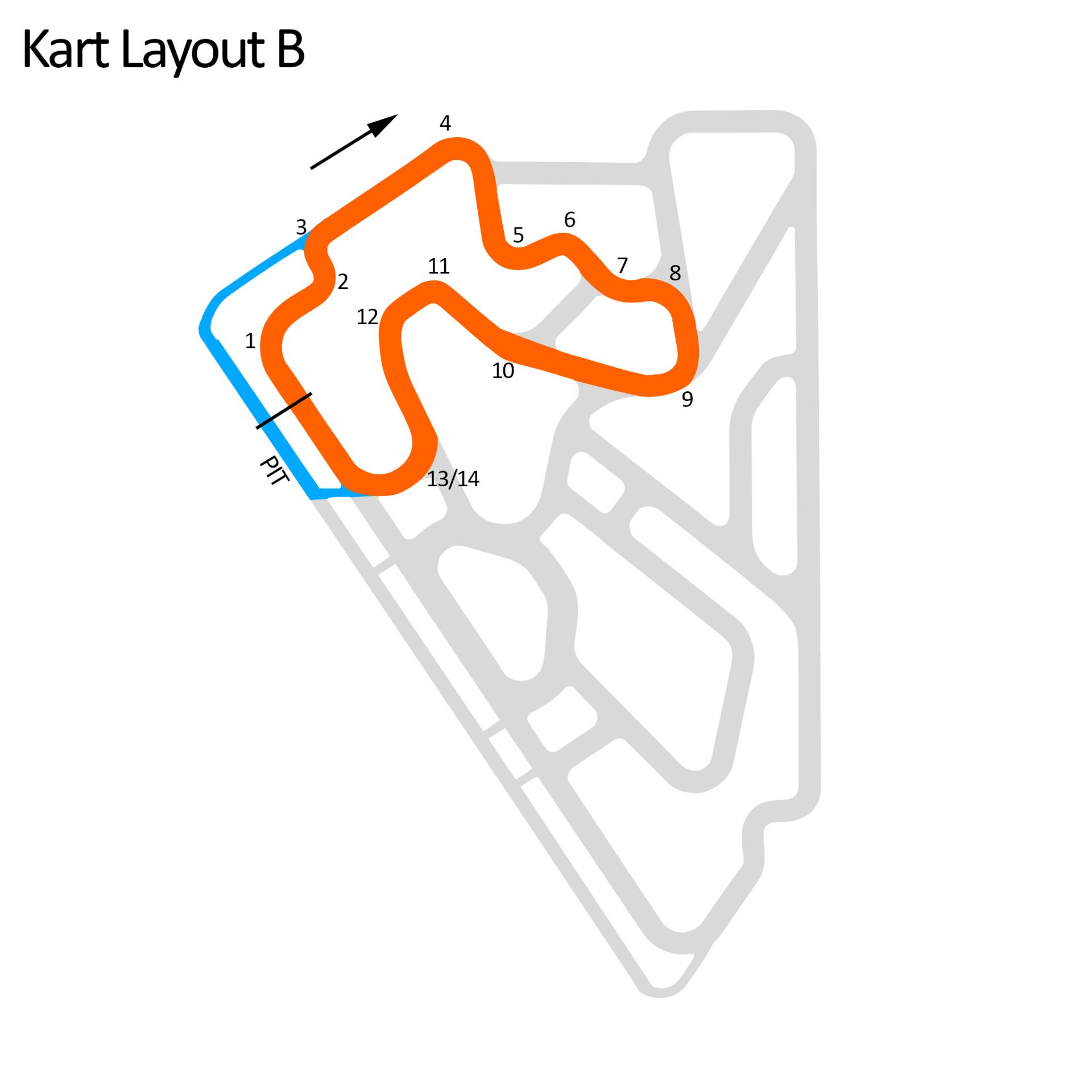 Karting C has a long straight and therefore high speed entry into the turn 1 chicane, here it requires abrupt and precisely timed off throttle turn in to avoid taking too much curb and flying off!  The mid sector is equally challenging. In turns 7 to 10 it’s vital to carry just the right amount of speed to keep an even flow and escape the dreaded ‘bog down’. 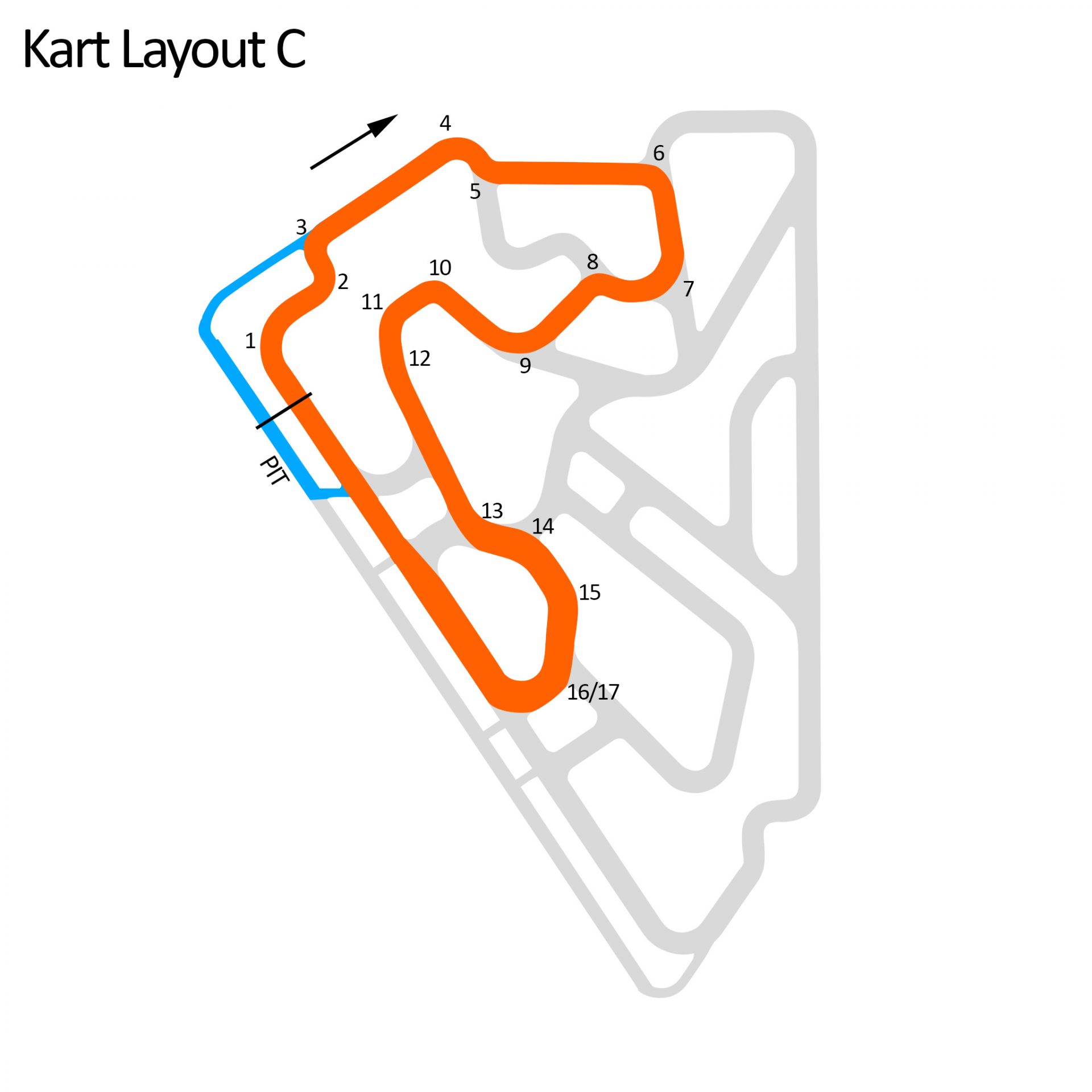 Karting D is much like B, but there’s a twist! It mixes the technical slow mid sector of layout B with the long fast front straight of layout C. 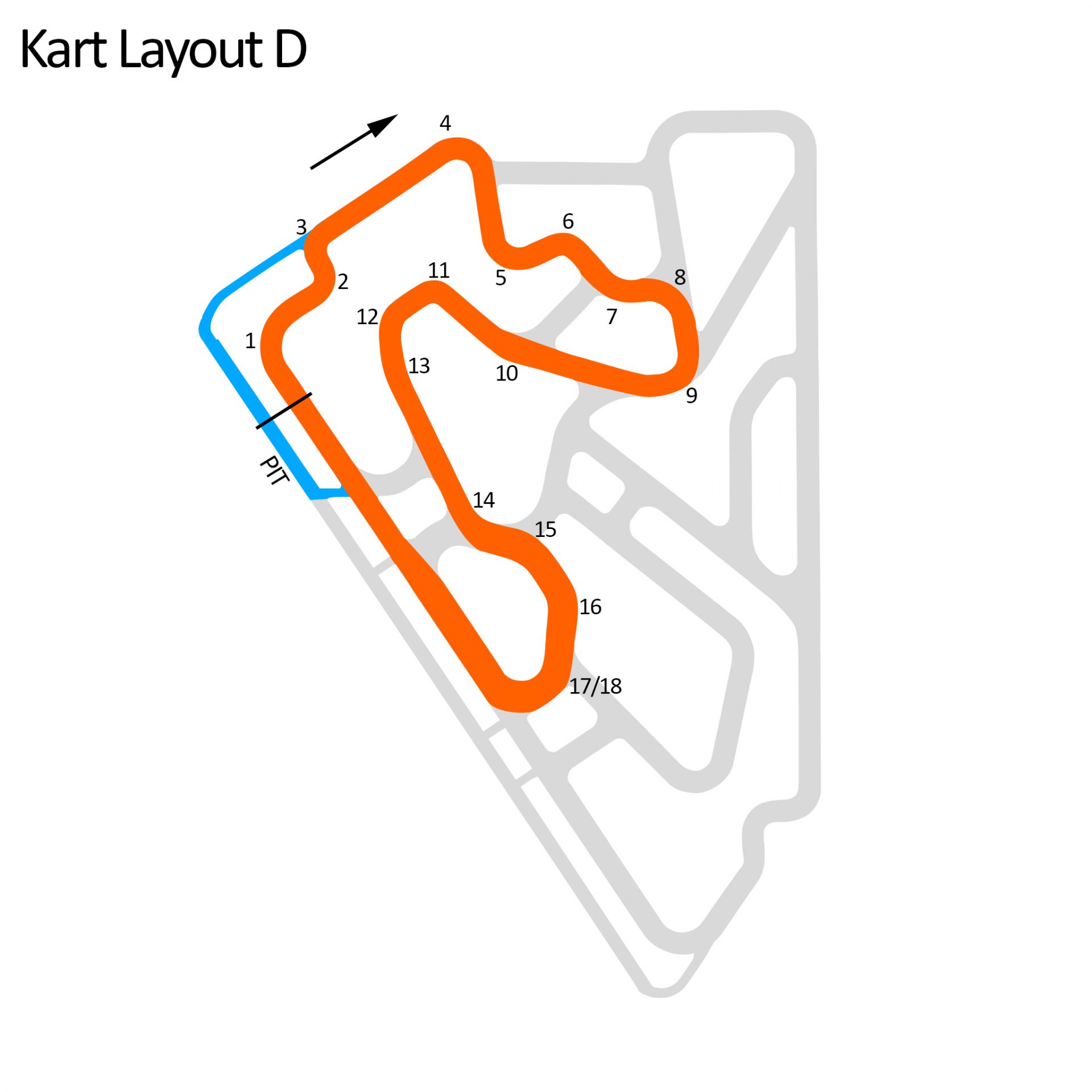 Karting E is the longest layout, with its long front straight into turn 1 ending in a slow right hand cutback. Turn 1 is a honey trap for the overconfident – here it’s all about ‘slow to be fast’!  Karting E is mostly mid and high speed turns. By using as little braking as possible, opting for ‘off throttle’ to slow in, and throwing the kart into slight drifts, you’ll see seconds start to drop off!  The massive back straight of E ends abruptly. Here, your choice of entry line in the final chicane determines the speed you’ll inherit into the last right hander and the long front straight – this is where you lose or gain a big advantage! 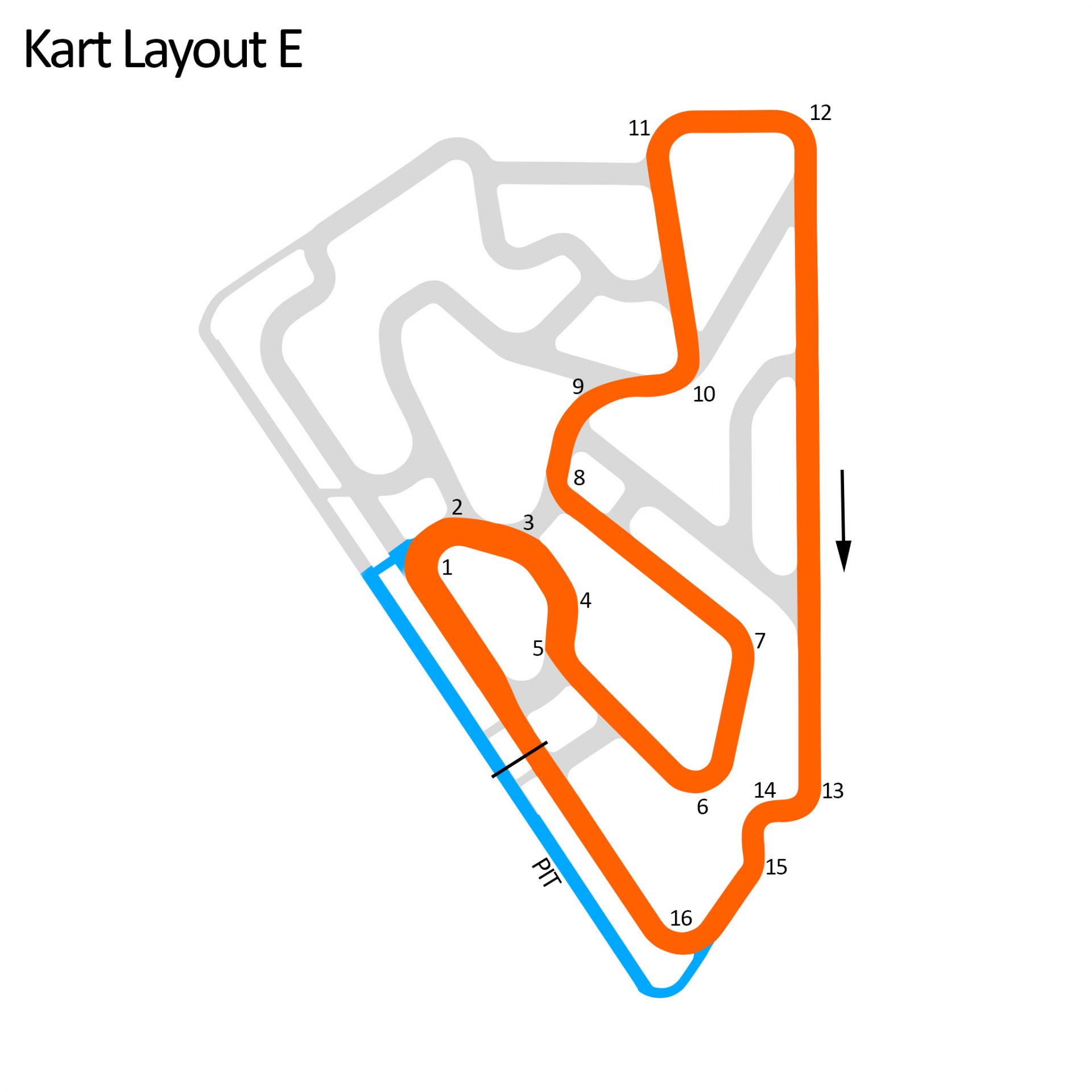